Soldiers of Oxfordshire Museum: Entry for Two Adults or a Family (Up to 50% Off)

The Soldiers of Oxfordshire museum is a military museum. Housed in a state-of-the-art building erected in 2013, the museum's collection features the history of Oxfordshire's people and their part in the nation's conflicts at home and overseas. Visitors can admire a comprehensive collection of Oxfordshire and Buckinghamshire Light Infantry uniforms, weapons and other artifacts covering the period from its formation in 1741 to its amalgamation into the Royal Green Jackets in 1966. The museum also houses the regimental collection of The Queen's Own Oxfordshire Hussars with militaria and archives covering the history of the regiment from its formation in about 1794 to the present day, through its different roles as Yeomanry, Artillery and Royal Signals. 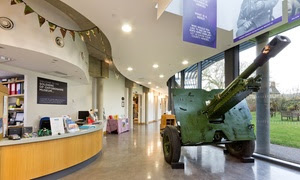