One of the funniest movies of all time is now a smash hit musical already seen by over half a million people. Direct from London’s West End, Dirty Rotten Scoundrels 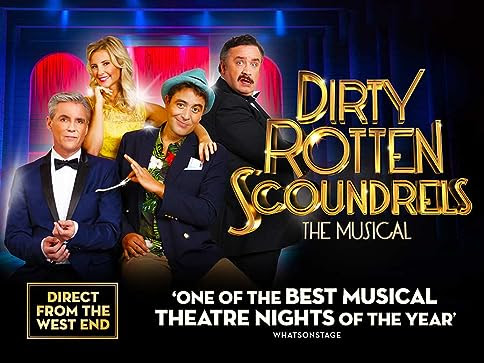 has been acclaimed by critics and audiences alike and this major production is a rare chance to return to ‘an all but lost era of musical comedy’ (The Guardian) and relive the golden age of the classic musical.
Based on the classic comedy film starring Sir Michael Caine and Steve Martin, Dirty Rotten Scoundrels will transport you to the French Riviera as two seasoned swindlers attempt to hoodwink a millionaire heiress. As the pair compete, they discover there is only room for one of them. From the producers of the phenomenally successful Jersey Boys and multi award-winning director and choreographer Jerry Mitchell - Kinky Boots (Winner of the coveted 2013 Best Musical, Tony Awards), Hairspray (Winner 8 Tony Awards) and Legally Blonde (Winner Best Musical, Olivier Awards) – Dirty Rotten Scoundrels brings together one the finest creative teams assembled. Written by Golden Globe and Emmy Award winner Jeffrey Lane, the writer behind TV's Mad About You, and music and lyrics by David Yazbek, winner of the Drama Desk Award for the Broadway and West End hit musical The Full Monty.
Posted by All About London at 18:08