Somerset: 1 or 2 Nights for One or Two with Full English Breakfast at 4* The Crown & Victoria Inn 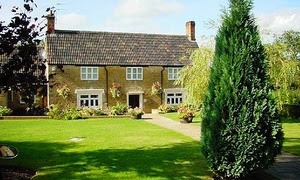 Situated in Tintinhull amid gardens and willow trees, The Crown & Victoria Inn invites travellers to its four star facilities in Somerset countryside. The inn can serve as a base for exploring the local attractions such as Tintinhull Garden, Montacute House, Stoke-Sub-Hamdon Priory, Fleet Air Arm Museum, East Lambrook Manor Gardens or Hardington Moor National Nature Reserve. The rooms feature wooden furnishings, hospitality trays and en suite bathrooms. The on-site AA Rosettte-awarded restaurant specialises in meat and fish dishes and offers a classic menu with a touch of innovation.
Bordered by the Bristol Channel to the north, Somerset is a rural county in South West England, characterised by rolling hills and large flat expanses.
In the area, attractions such as the caves of Mendip Hills or the Stanton Drew stone circles gather visitors from far and wide. On the northern coast of the Bristol Channel, travellers will find Bridgewater Bay, a National Nature Reserve consisting of large areas of mudflats, saltmarsh, sandflats and shingle ridges, some of which are vegetated and home to over 190 species of over-wintering waders and wildfowl.

Included in all options:
Option 1: for one person in a single room
Option 2: for two people in a double room