Somerset: 2 or 3 Night Self-Catering Stay For Two With Hot Tub Use at Potting Shed Holiday Cottages

With postcard-worthy views of the Somerset countryside, the Potting Shed Holiday Cottages rest within rural surroundings, between the ancient mysteries of Glastonbury and the medieval architecture of Wells. 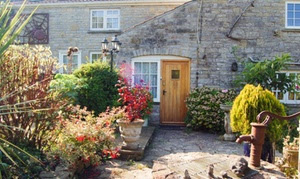 Included in all options: Cottage stay for two with free use of hot tub arriving until 31 Jan 2017

Bordered in the North by the Bristol Channel, Somerset is a rural county in South West England (UK) characterised by rolling hills and large flat expanses.
In the area, attractions such as the caves of the Mendip Hills and the henge monument at Stanton Drew stone circles gather visitors from far and wide. On the northern coast of the Bristol Channel, Bridgewater Bay is a National Nature Reserve consisting of large areas of mud flats, saltmarsh, sand flats and shingle ridges, some of which are vegetated and home to over 190 species of overwintering waders and wildfowl.
Posted by All About London at 08:47