Nestled on the banks of River Stour, The Mill Hotel is a 4* hotel standing on the site of a 1000-year-old mill mentioned in the Domesday Book of 1086.

Bordered by Norfolk in the north and Essex in the south, Suffolk is an East Anglian county of historic origin.
One of the main attractions in the area is the Suffolk Coast and Heaths, an Area of Outstanding Natural Beauty, boasting a mix of beaches, cliffs, marshes, estuaries, heathland, forests and farmland. One of the most important wildlife areas in Britain, Suffolk Coast and Heaths is also home to three National nature reserves, many sites of special scientific interest and the RSPB’s Minsmere Reserve. Other attractions in Suffolk are the Greene King Brewery, an 18th century brewery, and the Norfolk and Suffolk Aviation Museum, offering exhibitions of aircrafts and aviation-related artefacts. 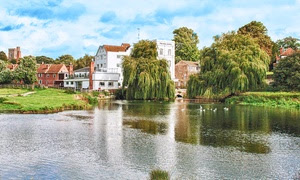